Warning: this is something experimental that is trying (somehow) to organize relevant (or important) informations, give more exposure to them, and reduce the work associated with the creation (or referencing) of them.

The main purpose is to (unofficially) centralize basic questions (and answers) about the basics of uCoin (or Cutecoin, Meta_Brouzouf, etc).

The secondary purpose is to find good questions and answers to put in official and more visible places (like the website’s FAQ, and/or the Wiki).

(suggestions - and English corrections - are welcome. Please contact me directly)

Good initiative. You can take a look at the discussions on the forum to fill its content. I’m pinning this.

Universal Dividend is, exactly, what?

UDt+1 = Max(UDt;c*Mt/Nt+1) where Mt is the whole monetary mass at « t » date, and Nt the number of members of the money community at « t » time, and I will assume now a value for the constant c = 10% / year. Most of the time it is UD = 10% / year of Monetary Mass per member. UD is the co-production of the money in space and time that implies any present or future member will co-produce the same RELATIVE amount of money (% of money) in his whole life (any member will produce 99% of M/N in 40 years). All that is fully explained and demonstrated in the Relative Theory of Money you can find (or contribute to) a translation here.

Is there the concept of inflation (devaluation of money, floating value)? If not, which feature guarantees it?

Relative money theory demonstrate inflation is a false notion, you have fair (libre) money and not libre money, some people produce more of common unit of value, and some people not in not-libre (not fair) money systems. Because in a libre (fair) money you have UD = 10%/year M/N, so you will have always M/N = 10 UD, and so never more 10 DU within the money, and so no inflation possible due to money. Economical values and prices can change, but this is not due to asymetrical money producion.

Can exist stock market (financial speculation) in the uCoin model?

This is out of the money. A common money is one thing, other rules about economy or society are other things.

Since uCoin does not guarantee a specific minimum gain, what is the simple mathematical calculation that defines how much the poorest member will surely receive? In other words, what characteristics directly influence the amount of money that the most « basic » member will receive?

Everybody co-produce in the present, and in the future, always, 10% / year of the money per member in a fair money, with not other money production. Money is so based on the men (and produce something by men is not « out of nothing » since men are not « nothing »).

A member can get incredibly rich? if yes, this affects other members? Negatively or positively?

RTM refutes positive or negative values, « rich » and « poor », since it applies the principe of relativity in its

3rd economical freedom : Any man is free to estimate and produce any sort of value.

You are not allowed as a man, or even as whole group of men to define for other men, what is value and what it is not, and so :

So RTM refutes any man point of view who pretend define for other man in space and time what is value and what is not value. RTM also integrate individual men live a limited average time period of ev = 80 years and demonstrate so that due to relativity principle c = ln(ev/2) / (ev/2) = 10% / year leads to any man will produce 99% of relative money during an average 1/2 life, independently of the time he was born, and independently of what he estimates is a value or not.

The total money in uCoin is a representation of what all the members are able to produce? If yes, it also is (or includes) something else? If not, it is what, then?

How industries heavily based in automation (high production, few employees) fit in this model? They still get commercial advantage? They affect society in some way? If yes, positive or negative?

Early adopters have some sort of advantage? If not, what guarantees? If yes, what allows?

No man has any advantage. neither in space nor in time. Any man co-produce money in the same way, thru a Universal Dividend that is a % of money not depending in time, so new born will have the same relative amount than dead prople had. 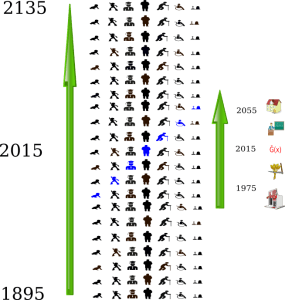 Other questions are much more technical ones, they are about what is uCoin P2P implementation of fair (libre) money, and so I let the software main contributors give full and precise answer.

The operation of uCoin is (explicitly) divided between client software and server software? If yes, blockchain is stored on the client, the server, or both?

Yes, uCoin architecture is divided between clients and nodes (servers). Blockchain is stored on server side. Clients only take needed informations from the blockchain.

There are anticipated problems related to the eventual size of the blockchain after a much long time of intense use by tons of users?

The curent Metab_brouzouf testing money last 160 years in almost 6 months. uCoin softwares (uCoin node and CuteCoin) will be tested with high traffic (many users, many transactions, many certifications…etc) to look if it can hold a high charge.

What is the expected time for the completion of a money transfer?

It is (or it will be) possible to cancel (or reverse) transfers?

It is actually not possible to revoke money transfers. Do you think it is a great think if we are allowed to revoke a transfer?

And then, because there is absolutely no absolute referential at all, you cannot say something else than : a libre money is a relative money.

Since ucoin was developed because of the RTM, its an important text yes. We hope to finish it’s translations for the end of the year.

If you don’t want to wait, you can read Galuel explanations on the forum. You could get a grasp on the basis of the RTM. (Galuel is the one who created the RTM)

Since there is not, exactly, a money creation concept; what there is, then, is a slow release of a predetermined total?

It’s only distribution (no need of “re”)

Relative point of view is made of transfers. Transfer is more a redistribution mechanism to me.

Distribution is more a quantitative concept.

What are the cases that a person will lose its money?

uCoin does not care about privacy. All actions, transactions, certifications can be accessible to everyone. uCoin project is mainly focused on creating a fair monetary system first. Anonymous transactions will come later with an upper layer or other projects…

What are the cases that a person will lose its money?