for the last few months, the Wot has grown at a steady rate of 20+% per month

I have actually done the following calculations based on the graph of the numbers of members in cesium (you can double-check the numbers yourself): 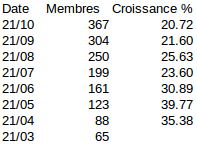 The formula to calculate the percentage is: (current - previous) / previous x 100. Did I mess up something?

Note: I believe that the rate slowed down after a few months because the licence started getting respected more strictly, but that’s just my own intuition.

Your calculation is correct if you consider that the growth is evenly exponential, which is not exactly the case. 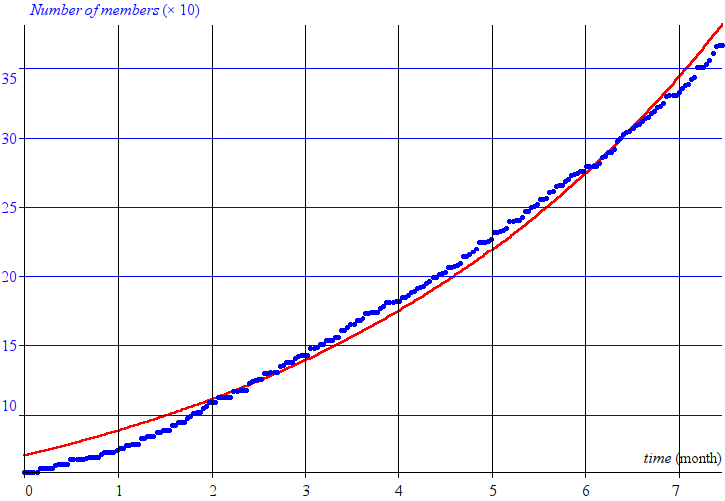 ExpGrowth725×501 13.1 KB
But if you consider that, during the first month or so, the growth was linear, it gives you a new picture, with a much better fit. 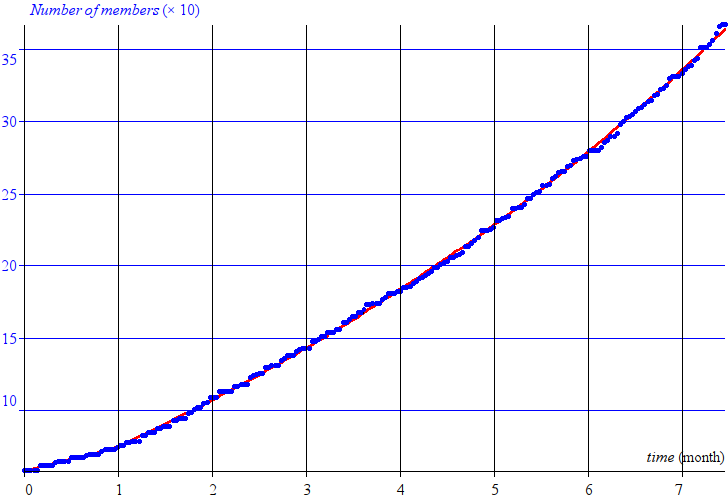 I’m not sure how you calculated this value of 11.4.

Which is far from the 330 or so on month 7. The same goes with other months.

So I am puzzled about how you obtained the « rate of 11.4% ». Could you give the detail of your calculation?

Actually I don’t assume that anything ls linear or exponential. I just observe the growth month after month, compared to the previous month, not « overall ». If by observing that we get a « reasonably stable value », then the growth is exponential-like on the interval where this « reasonably stable value » is observed. Of course, depending on the day of the month on which you observe, there may be some variations in my very imperfect measurement, but it still gives a general idea of where all this is heading.

I use a nonlinear regression with the following function:

@eukreign sorry for the disturbance.

I see, so 11.4 is one of the parameters of this extrapolating function, but it does not reflect the actual monthly growth rate, it is only a parameter of a function (which by the way is inside an exp function). It’s as if you were extrapolating with f(x) = a * sin(b x + c) + d and giving me the value of b.

To answer the actual questions, I would say that:

Besides, the introduction of a central database in a fully decentralized system is kind of a paradox and could lead to serious problems (security, centralized authority and its drawbacks, etc). We generally want to do the opposite. It seems to me that the real solution to the problems of “exclusion” is “patience”, which solves pretty much all the problem without introducing new ones.

So even if we wished to, I don’t think there is any way of implementing this, not in the current version of duniter, and probably not in the near future, but I’ll let the devs comment on it if they have further ideas.

Of course, anyone can start their own currency with different rules (for instance certify upon seeing someone’s ID in random video meetups or whatever means) and see how it goes. I bet this would collapse quite quickly but of course I might be wrong. The WOT as it is today is a result of years of thinking…

Any place other than cesium where one could view this data?

I’ve written a little piece of code that calculates the size of the WOT day by day. It’s a by-product of WotWizard, that I never planned to publish.