Per discussions in chat a few days ago it was suggested that I model my concerns about external users of the currency (those not receiving dividends) losing value too quickly.

I added E1 column to the Galileo Module which does not get dividends and this is what I got:

After only 4 years the external user has lost 25% of the value of their initial acquisition of 1000 coins.

Given the difficulty with which it takes to build up the WoT and the speed at which external holders of the currency lose value it’s not really a workable system.

There would need to be either a more flexible WoT system (where you can have « provisional » members as I discuss in the other thread) or some way to reduce the effects of inflation for external users to at least 10% over 10 years or better.

I just realized that I3 appears to also have lost about 25% of the relative value of their starting amount after 10 years. That’s not very appealing either

Am I missing something here?

After playing around with the numbers I’ve found that 4% inflation starts to feel better and is actually comparable/better than the USD « unofficial » rate.

How about new borns and deaths. How do the money issued by everyone evolves when you use a 4% issuance rate ?
Notice that with 10% issuance rate, the curves look like below. The symetry ensures that the money units issued by a new entrant are not exceeded by the money units of the one who left the currency. After 40 years, the money of the deads represent a small share of the monetary mass. But how does it go with 4% ?

Please notice that in this case, we treat the classical « births and death » case based on a 80 year life-expectancy. But the reasoning is applicable to a community with entrants and leavers, and the fact that after 20 years, this will not be the same people who will participate in OSE than 20 years before. How do their currency issuance share evolves using a 4% issuance rate ?

I know that I’m not speaking about external holders, but first I’d want to analyze this case with you. There are other things to say but let’s do one thing at a time…

Can you upload the spreadsheet that generates the above graph?

(My screenshot is from the file from my Galileo module, on a 160 years timeline.

Here is your graph with 4% growth:

And how to you analyze it ?

Well, since we cut the growth rate in more than half, the coins have retained more than twice their value towards the persons conclusion.

How much time is needed for a new entrant to get the same share of money issuance as previous members ?

I can’t tell this from this graph.

I think we can

Let’s look I11. From his first days to the day he dies : how do the share of monetary issuance (= the relative value of his money amount, since he doesnt exchange anything in this case) evolves ? How much time is needed for it to get to its maximum ?

I2 is only present for 64 years before they leave the planet, so is it expected that they would be able to reach the maximum?

I2 through I10 do not reach the maximum because they did not use the currency for the expected lifespan.

Obviously, the faster the inflation the faster people will reach their maximum. Is that your argument?

Obviously, the faster the inflation the faster people will reach their maximum. Is that your argument?

No, my point is more philosophical. How about these people ?

The goal of Open Source Ecology is to make life better and more fulfilling. Why not have this expectation in the currency also? 80 years is good starting point but I would like to aim higher (or longer).

Life expectancy has grown overtime. In the next 20 years we’ll probably tack on another 20 years to that estimate and more people will be living to 100 if not longer.

The critical thing for me is having a robust and adoptable currency. Since the success of a currency hinges on its perceived value and how easy it is to use for exchange:

If the currency fails on the two things where the proverbial “rubber meets the road” then it has failed has a whole.

Reducing the inflation to 4% seems reasonable given the USD inflation as mentioned earlier and it solves the issue for external holders of the coin. It will be easier to convince people this way I believe. But I’m definitely looking for more and better perspectives and solutions. It just has to be easily to explain and relatable for ordinary folks.

it will be perceived negatively

So, how do you analyse the fact people are joigning Ğ1 ?

Values that are considered compatible with life expectancy are justified in the following chapter :

Since we would like people to use their rights while they are alive, we should choose a point which is part of this graph : 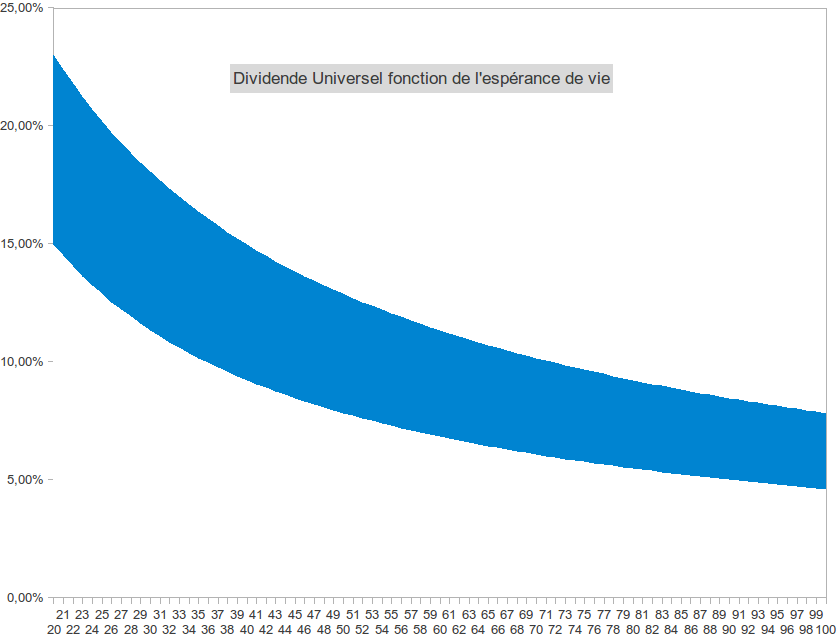 As you can see, 7% is considered OK with this problem. Since you seem to expect to have more external users than members, maybe a value on the lower end of this interval would fit your project better.

On Ğ1, we chose 10% because its make UD easy to compute, and because it makes everyone converge to 10 UD, which is also very easy to remember. We expect to have more members than external users, so the easier is the system for them, the better.

The rules behind monetary creation in Ğ1 are openly displayed and quite easy to understand. For an external holder, you can sum it up to “10% yearly inflation” for people who don’t want to get into more detail. I don’t see such explicit and simple rules on any national currency in the world.

As for the choice behind the value of 10%, it is not arbitrary and calculated from the life expectancy of the users. In fact, this value can be within a certain range. And Inso was faster than me on that one.

Since you will be the one explaining your choice, I will let you analyze how the issuance share behaves using this value