How many full nodes on g1 network

wondered how many g1 members are running a full node on the network? i heard it was around 200, is that correct? anywhere i can get this kind of data? not found it on the duniter.org page… thanks

and if it was only 200 nodes, any reason for this? does the network encourage more people to run a full node?

Hi, this is the total number of identities having forged at least one block along time. 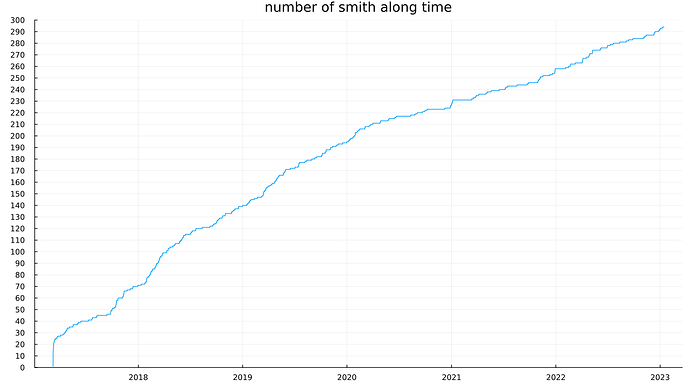 But the distribution of computed blocks is uneven. Here are the number of blocks computed by the first 100 smith (log scale).

ok. thanks for the reply hugo.

the 2nd graph didn’t come out clear enough to read it, but that’s fine.

i’m not sure what the term ‘smith’ refers to.

i sense that the number of identities having forged at least one block over time, would be correlated to a number for ‘full nodes’ on the network?

i’m not 100% on how the blocks are validated, but from what i gather there is no competition between forgers and a block is validated ‘randomly?’ amongst the nodes… with forger donations being equally distributed to all nodes? maybe based on the time they are online? or something…

my question was referring to how many nodes on the network store and run the whole duniter blockchain? i assume the figure, of almost 300, as shown on the top graph would correspond to this?

it’s related to security. my sense is that the more full nodes on the network the better the security and strength of the network, if for example a number of nodes would go down (or be shut down)… as well as usability, seeing that the many users that require the data from the blockchain use the full nodes as peers, or mirror nodes (whatever the term is), to carry out transactions etc, on cesium… would it not be the case that more full nodes, would equate to better, quicker functionality of the app and transactions? as well as heightened security and robustness of the network?

just wanted to share where my question was coming from.

The 2nd graph is svg, you can open in a new tab and zoom as much as you want.

Smith are “people who forged blocks”. I should make an other graph counting the recent number of smith, but you can still check this one: Visualisation des forgerons.

Too many questions for me to answer, you have to learn a bit about the way a blockchain network operates.

ok. thanks hugo.
yes, was able to open 2nd graph as you advised. thanks… will explore more later. have the translation of the french. but must head out now.

i hear you. i can ask many questions… it is a immense field for sure, blockchain tech. i am very much just scratching the surface.

from what i gather there is no competition between forgers and a block is validated ‘randomly?’

There is a competition for being the first to solve a computational problem for being able to build and broadcast the next valid block. The competition is random but biased by computing power.

To correct this unfair and dangerous bias, some rules apply to increase the difficulty of the problem that you must solve, when you start to solve it too quickly (i.e. forge too many blocks wrt other smiths). After forging a block, you must also wait that at least 1/3 of the other active smiths forge a block, to be able to forge again.

with forger donations being equally distributed to all nodes? maybe based on the time they are online? or something…

my question was referring to how many nodes on the network store and run the whole duniter blockchain? i assume the figure, of almost 300, as shown on the top graph would correspond to this?

The Network tab in Cesium shows around 50 active nodes.

would it not be the case that more full nodes, would equate to better, quicker functionality of the app and transactions? as well as heightened security and robustness of the network?

For now the network is quite small so this is not a real problem anyway. (except during events when dozens of people use their wallet at the same time, connecting to the same node)

ok. thanks for the thorough response tuxmain,

so, from this:
The competition is random but biased by computing power.

does that mean that with higher powered machines you have more likelihood to sign off blocks? but as you shared, the blocks can’t be signed by one node, one after another… but is there still incentive to run more powerful CPUs for forging?.. you say the problem to solve gets more difficult based on how quickly you solve the problem… i would have assumed the difficulty would have been the same for all the nodes forging? (pardon my ignorance, i’ve not dived deep into the mining field)… just aware that g1 forging is quite different to btc mining.

not sure what this means:
forge too many blocks wrt other smiths

appreciate your clarity. will take note of what you’ve shared, and likely add it into one of the FAQ’s on the website if ok.
thanks

The problem is the same for every member at first, but if you have a greater computing power you will win the competition more often that other people. So the protocol increases your difficulty. This way, we remove the incentive to increase the computing power.

For example if I’m running my node at 1% CPU and suddenly set 100% CPU for Duniter’s PoW, I will forge blocks more quickly so I will get a higher difficulty and take more time to compute my next blocks. Eventually I’ll forge blocks at the same frequency at 100% CPU as at 1%.

The difference with bitcoin is that we have identities that can be used to tweak the difficulty for each smith instead of only for the entire network. Without identities, if you increase the difficulty for a particularly powerful node (or even ban it), it just has to change its pubkey…

not sure what this means:
forge too many blocks wrt other smiths

Sorry, “with respect to”. (maybe “in comparison with” would have been more correct…)

ok, great. thanks for clearing all this up tuxmain… i’ve noted it all, and will compile it at some point into an faq on forging g1 i imagine, at some point… is all a lot clearer now.
appreciate your patience.

i’m doing a couple of g1 talks here in english at the end of the month, so having a more refined understanding of how the network works, is very helpful.

so from what i gather, there is no real, long term benefit of having more computing power, if the difficulty will bring you back in par with lower powered machines. a great system.

and having each node tied to an identity, means they can’t change pubkeys, as you say, if their difficulty rises due to more computing power…

so forging with a Pi4 would be as effective and useful as using an ASIC?

so forging with a Pi4 would be as effective and useful as using an ASIC?

Yes, in theory. In practice the adaptative difficulty is not perfect…

Another problem is the overall network computing power: if everybody uses a tiny computer, an attacker can easily reach 51% of the total power and this is still dangerous.

In Duniter V2 there will be no PoW at all so we’ll have the wanted properties (smiths selected randomly and uniformly) without the drawbacks (no compromise between overall security and power consumption, no adaptative difficulty imperfection).

ok, great. thanks again for clearing all these queries up for me.

is good to know where duniter is currently, and where it is potentially vulnerable… and how V2 seems to remedying these areas from what i gather.
nice work guys. looking forward to V2 being implemented, and everything that that brings with it.

seems there is no need for me to probe any deeper into these fields, with V1 being irrelevant very soon it seems.

have noted all you’re shared and will include in the website.
thanks